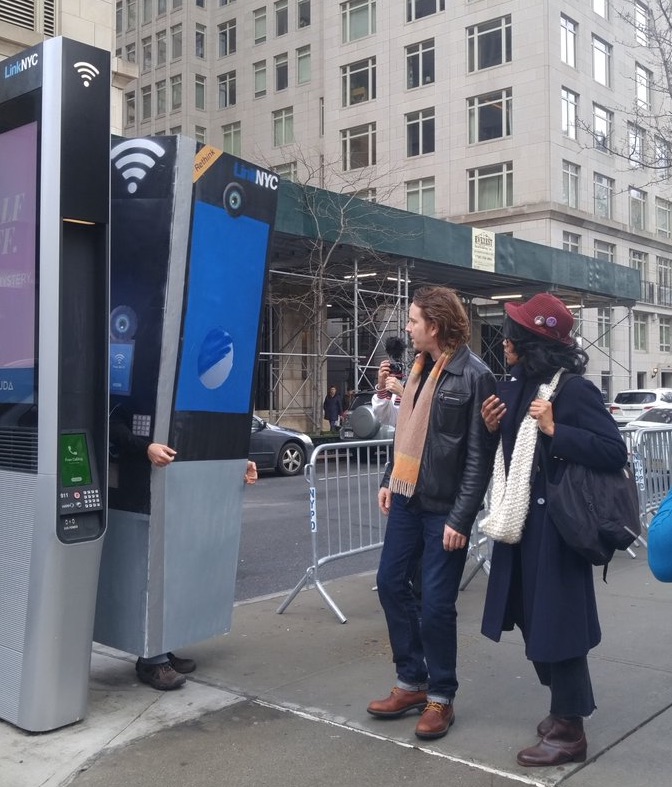 At lunchtime on January 12, under the shadow of the Trump International Hotel at 61st and Broadway, members of RethinkLinkNYC brought a LinkNYC kiosk to life through an original skit featuring a wise-cracking 8-foot tall kiosk persuading an attractive young Brooklyn couple to use his “free” services. The talking kiosk had its 3 cameras exaggerated to a 12-inch diameter, whereas on the nearby stationary kiosk one could barely tell the cameras were there. The skit emphasized all of the ways that surveilling our physical and digital environments can harm us even if we are not breaking the law.

The street performance attracted a diverse group of media, allies including Theo Chino, founder of NYCPrivacy, and pedestrians. One enthused member of the crowd, famed author and activist Naomi Wolf, has long been concerned with the over-reach of law enforcement. Most passersby were unaware of the corporate data collection that funds LinkNYC. “I had no idea there were cameras in there” one onlooker remarked, a sentiment echoed repeatedly by many others. “As a person of color I especially feel targeted by the surveillance system”, said Reuben E. Mendez, a young activist holding a sign reading “Stop Kiosk Spying”. He went on, “the police have a history of disproportionately targeting marginalized people through programs such stop and frisk. This constant surveillance should not be normalized.”

Link NYC kiosks are springing up all over the city. They are marketed as “free” public wifi and a general public service. New Yorkers are not being told that LinkNYC is capable of tracking their movements, association patterns, browser habits, and online activities. Law enforcement agencies can easily access this information, corporations sell it for profit, and the government now has the tools to practice mass surveillance.

RethinkLinkNYC is a grassroots group concerned with justice and privacy and are demanding to “rethink” the LinkNYC program. One member insists that New Yorkers deserve to know that “their personal data will be compromised, and their facial image can be stored on an unidentified data base, for undetermined usage.” On their website, http://rethinklink.nyc, claims LinkNYC is not true community wifi. True community wifi unites and connects people. It affirms freedom, openness and trust.

Photos and video available upon request.

We are a group of concerned citizens from a variety of backgrounds who see opposition to LinkNYC as a non-partisan issue. We believe that all New Yorkers will share our strong suspicion of this program when they are better informed. We named our fledgling movement RethinkLinkNYC, because we believe that this program needs to be rethought, and quickly. Free Wi-Fi should really be free, and citizens— not corporations—must have the freedom to decide if and when our data is used.